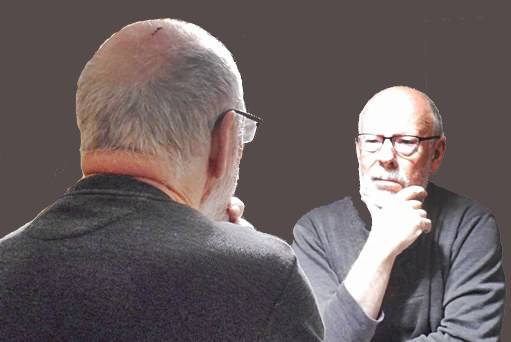 Midnight, and I’m leaning against my bathroom sink staring into the face of an old man whose expression seems to suggest that’s it’s time I stopped trying to pretend I don’t recognize him.

Or maybe just acknowledge him. Whatever. He’s me whether I like it or not, and the fact is he’s not all that hard to like, just looks a lot older than I feel I should look given how I feel. Although come to think of it, I feel pretty damn old right now.

Or is that really it? It’s midnight, and I’m dead tired, having just gulped down the last of my rum and root beer [one shot of rum, eight ounces of root beer] and switched off Netflix for the eighth time in as many days, a habit I’ve only recently acquired by way of arranging to sleep longer, and wake up less frequently.

In fact, this is probably as bad as I’ll look all day, and I know there’s plenty of guys younger than me who look worse at noon. But that’s not the point, and we both know it. I can tell by the way his eyes narrow ever so slightly that he’s really getting tired of these stock excuses, and besides, all comparisons are odious, as some venerable sage from some far eastern country once famously intoned. Arguable, but the point is obvious: we’re not talking about those other guys.

And okay, I have to concede that seventy-two isn’t really all that old,  maybe on the cusp of old, closer to ‘eld’ as I sometimes joke to my landlady, who is sixty-eight but says she’s fifty-four, just like Dylan said. Next year I’ll be fifty-five, she tells me with a perfectly straight face . . . well, maybe not perfectly, her face has got a few well-earned bends and curves and creases in it, just like mine.

What suddenly strikes me as odd this time is how the guy in the mirror doesn’t have long white hair hanging down to his clavicles like I sometimes imagine mine does, or should, given the rest of the body. Longish hair, a bit scraggly but not even seriously over my ears, and a beard that I make some effort to keep neat  and clear of scraps of food. But the hair isn’t nearly as long as I sometimes imagine it. Like an old hippie, which I’m not. What’s that about? My friend across from me twinkles a bit like he might know, but he’s not telling.

Okay, so what is this anyway, some kind of epiphany? I know the years have been ticking past, I can feel the weakness in my limbs that used to do heavy construction once upon a time, but I still manage a decent clip walking for about an hour and some long afternoons out on the river with a paddle in my hands, and several klicks on the bicycle, weather permitting, albeit a so-called lady’s bike with the low crossbar so I don’t have to swing my leg up and over . . . so what’s my point? It’s only compensation for what I know I can’t still do and be assured of remaining upright. I’m not in some kind of denial. But given all that, I don’t really feel that I should look like . . . this.

He gestures as I do, reminding me that he’s not any happier about the passage of time and fading of fortitude than I am.  But he seems to have adjusted to it better — or at least sooner — than I have. Time for me to catch up. Life will be simpler, and nothing really needs to change except I need to remember some things when I’m not actually standing in front of a mirror, like for instance what a young girl might be thinking as I pass her in the street and she looks up with a pleasant smile. I remind her of her grandfather, time to get used to that. It’s no less pleasant a smile.

And the young bucks who move casually out of my way as I wend my way down the sidewalk. Out of respect, not fear. Or maybe it’s more like a kind of sympathy. All these mafioso movies have given respect a different meaning . . . or maybe that’s the real meaning, a little bit of fear tucked away inside there to keep them from getting lippy, not like today where you have to respect everybody’s opinion equally. That’s not respect, that’s kowtowing.

The arched eyebrow across from me is suggesting I should maybe calm down and not start sounding like one of those ‘Why-in-my-day’ kinda guys. Unless I’m actually turning into one of those guys? Has that much changed? I’ve never really bought into that game we all play about the cost of a loaf of bread or whatever, never tire of pointing out that it’s all relative. But the truth is, it’s not all relative.

My dad bought us a very nice, comfy house in what is now quite an upscale neighborhood for the same money he made that year, just a few years before they started telling us not to mortgage ourselves for more than two-and-a-half times our annual salary. Some things have changed, so don’t gimme that. And some even for the better, I imagine.

Seems when I look back, the time has gone kinda  quickly. Maybe that’s because my memory isn’t as good as it once was . . . hell, my memory is shot! But the point is, as we get older we don’t remember as many details as we used to, so last Christmas seems to have come very soon after the one before. What’s the rush?

How come everything seemed to take so long when we were trying to get life going, and now we’d sometimes just like to slow down and smell the roses — maybe even stop and smell them, isn’t that the way the song goes? — but half the time we don’t even notice them.  And five minutes later, it’s snowing.

The longer we stand here staring at each other the worse our posture gets, and that’s depressing. At least I have some control over that. There. Not half bad. Maybe I should just let the hair and beard grow, that’d show ’em. Or maybe even shave it all off . . .  nah, that’s too trendy. I’m having enough trouble just staying current.

Time to hit the slab, as we used to say. Can’t remember what we say now . . . get some shut-eye? Good Lord no, that’s cowboy talk. Was I watching cowboys tonight on the TV?

Doesn’t matter. Whatever it’s called, I’d better get some. Goodnight old timer. See you around sunup . . . or thereabouts.

Mo is a retired actor, director, and playwright, now living in the charming town of Gananoque, Ontario, one of many gateways to the famous Thousand Islands. In a former life he was also a contributing editor to the Kingston Whig-Standard. His most notable literary achievement came near the end of his theatrical career, namely having a play produced at the impressive new theater in Saskatoon, Saskatchewan, the closing night of which he managed to attend by arranging to be cast in a play which opened immediately afterwards. In recent years he has turned his hand to creating short works of fiction — mostly for the pleasure of writing them, although the odd one makes its way into the hands of receptive editors and/or loyal fans.